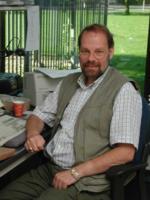 The Feathers. There is not an easy set of guidelines which you can follow to determine the quality of the feathers. Especially when you want to relate this characteristics to a pigeon’s ability to achieve. We all prefer our pigeons to have soft and shining feathers.

Among the bloodlines you will have no trouble pointing out the pigeons belonging to Delbar, Fabry, Bricoux, Van Bruane, etc. This sometimes because of their shining feathers. Contrary to these, the pigeons of Devriendt, Cattrysse and the almost indestructible Stichelbauts have a much looking plumage.

Again it is Piet de Weerd who comes up with a fitting description: “First we were of the opinion that these birds were poorly dressed, but after closer inspection we had to correct ourselves. These birds costumes are made from the indestructible ‘worsted’ cloth.” 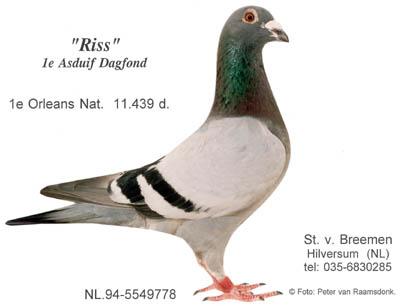 “Riis” is the winner of the 1th National Orleans 1996 against 11.439 birds. In the total field of all 50.000 released birds he was way the fastest: 8 minutes ahead! “Riis” is the son of “The Blue Diamant”(Inbred Janssen line of “De 08 Duif) and “Het Asgrauw” a direct daughter of the miracle pair “De Goede Jaarling” and “Het Schoon Blauw”. The 1999 Provincial Ace pigeon Dayraces is a full son of “Riss” and “Orleans Lady”, the result of a mating of 2 National winners!

I read somewhere that when the feathers feel dry, this in the first place is caused by a problem in the digestive tract and, secondly, by a diet this is low in proteins and minerals during the moulting. But it is my opinion that dry plumage is found in certain families. Secondly, we know that it is a question of inheritance. I’m able to prove this because I have different pedigrees in my lofts with the one line having dry feathers while another line excels in very rich plumage(remember all in the same loft with the same care).

It has happened more than once that the poor feathered birds did much better in the races than those endowed with the perfect plumage. The only reason why I mention this is to indicate that there is hardly any connection between the quality of the feathers and the ability to achieve in the races.

We all love to have birds with a silken plumage. From a practical point of view, however, soft silky feathers complement a pigeon’s appearance, they do not necessarily enhance it’s performing qualities.

The feeling of silky softness of the feathers is the result of a generous supply of powder. This powder helps the feathers to better withstand rainy weather. In most cases, however, we have to conclude that pigeons with extra thick plumage, especially when its around the tail end, are a bit slower. You’ll find very few extra fast race birds in this group. It’s more likely that these birds will end up with an occasional prize at the bottom of the list. The excess amount of feathers becomes an additional burden.

At home I’ve tried to judge the quality of the feathers in a different way: I allow the birds to bath and afterwards watch for the ones who’s feathers dry up the fastest. They have the best plumage. You don have to catch pigeons in order to draw your conclusions.

Again, the pigeons who, according to this list, ended up with the best plumage, aren’t necessarily also the best racers. These are two unrelated factors.

Having the best possible plumage may have an influence on achievement, just as poor plumage may have a negative effect. But the overall quality of a pigeon is not related to the plumage. Many other factors play a more domineering role.